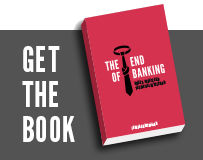 «An interesting and challenging vision» (Vítor Constâncio, Vice-President of the European Central Bank)

«Offers much to consider» (Publishers Weekly)

«The End of Banking is easily the ‘deepest’ examination of our financial system in a generation. The authors make crystal clear that it is only because we outsource money-issuance – a state function – to private institutions called ‘banks’ that money and credit fuse into one thing in contemporary economies.»

«Since policymakers are unwilling or unable to control our reckless financial system, rethinking the legal and economic foundations of banking is worthwhile. This thought-provoking book makes radical proposals that strike at the source of fragility in banking and which should be considered seriously.»

Anat R. Admati, Professor of Finance and Economics, Graduate School of Business, Stanford, and coauthor of The Bankers’ New Clothes: What’s Wrong with Banking and What to Do about It

«A fascinating analysis of the central role of money creation and shadow banking in the financial crisis. And a thought-provoking vision for more stable financial markets in the digital age.»

Alexander Barkawi, Founder and Director of the Council on Economic Policies

«I recommend The End of Banking for three reasons. First, the authors understand how the digital revolution is changing money, credit and banking. Second, the authors attempt to tackle monetary problems at the fundamental level of accounting. Third, the authors use simple and clear language.»

«This brilliant book explains, in simple and eloquent terms, how traditional banking really works, and what’s fundamentally wrong. A must-read for anyone interested in the future of finance.»

«Not content with their brillant, cogent analyses of the failings of incumbent, legacy finance and the excesses of private money-creation, the authors propose fundamental 21st century reforms. I hope Akerlof, Shiller, Stiglitz, Romer, Rob Johnson and other financial reformers will heed these and promote them.»

«McMillan wants an end to our current, toxic financial system which allows banks to create loans and deposits (money) by simply writing up both sides of the balance sheet. This system diverts seignorage to banks from cash strapped governments and increasingly encourages “boom-bust” financial crises. Worse, policy measures in response increase moral hazard and regulatory evasion in a never-ending and dangerous dynamic. In this book, McMillan embraces the digital revolution and shows, clearly and compellingly, how it can be used to create a financial system that is much better, much simpler and much fairer. Read it urgently and dare to think big.»

William R. White, former Head of the Monetary and Economic Department of the Bank of International Settlement, and currently the Chairman of the Economic and Development Review Committee at the OECD

Convinced? Then get your copy now!

What is it about?

The End of Banking explains why a financial system without banking is both desirable and possible in the digital age.

Why should I read it?

The End of Banking distinguishes itself from other books about the financial crisis of 2007–08 in several ways.

PART ONE – BANKING IN THE INDUSTRIAL AGE
1. The Need for Banking
2. The Mechanics of Traditional Banking
3. The Problems with Banking

PART TWO – BANKING IN THE DIGITAL AGE
4. Banking Is Not Limited to Banks
5. The Mechanics of Shadow Banking
6. The Financial Crisis of 2007–08
7. The Financial System after 2008

PART THREE – A FINANCIAL SYSTEM FOR THE DIGITAL AGE
8. Banking Is No Longer Needed
9. Accounting for the Future: End Banking
10. The Role of the Public Sector
11. The Big Picture

Conclusion
References
About the Author
Index